I came across this tweet yesterday which made me think about how my stoner friends actually react whenever I tell them about the harmful effects of smoking weed on daily basis. 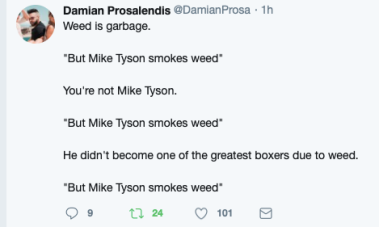 If you are one of the person who is still away from weed/marijuana, you can relate to this tweet. “Elon musk also smokes weed” or “Look at snoop dogg and his creativity” or they would name 100 other celebrities whenever you question their addiction. Most of your friends who are now addicted to this thing (though they won’t accept) are commonly facing these issues:

My idea here is not to offend any stoner or regular weed smoker. I am just trying to help. And for same reason I contacted Snehal Singh who is forensic graduate and now pursuing clinical and criminal psychology. I asked her to send her research and all the findings on Marijuana consumption. Read on.

Cannabis is the scientific name for the hemp. There are various kinds of cannabis. The leaves and flowers of each produce varying mind-altering and medicinal effects when smoked or consumed.
Marijuana is the Mexican slang word for cannabis leaves and flowers. It refers to the dried leaves, flowers, stems, and seeds from the Cannabis sativa or Cannabis indica plant. The plant contains the mind-altering chemical THC and other similar compounds.
According to Centre of Addictions research, there are at least three main reasons why youngsters indulge in cannabis use:
1) At times they just want to know what being high feels like.
2) To fit in— occasionally to fit in at parties or just to have fun.
3) To cope—some feel they need to be in an altered state to feel okay about themselves and their world

People smoke marijuana in
• hand-rolled cigarettes (joints) or in pipes or water pipes (bongs)
• blunts—emptied cigars that have been partly or completely refilled with marijuana. To avoid inhaling smoke, some people are using vaporizers.

Long term effects of Cannabis use:
• In 2013, Rocio Martin-Santos, MD, PhD, at the University of Barcelona, and colleagues studied that chronic cannabis use provides consistent evidence of both structural brain abnormalities and altered neural activity in marijuana users. Marijuana use has been linked to mental health problems, such as disorganized thinking, paranoia, depression, anxiety, and suicidal thoughts among teens. However, study findings have been mixed.
• THC negatively affects the production of testosterone. It has been found through research that THC leads to a reduction in sperm motility, or a sperm’s ability to swim properly, which also contributes to male infertility (Fronczak, Kim, & Barqawi, 2012).
• Some studies suggest that if you carry certain genes you may be at increased risk for developing a psychiatric disorder. If you are amongst those specific genes carrier than you are 7 times more at the risk of developing psychosis. (NIDA, 2016; Caspi et al. 2005).
It also accounts for the high risk of anxiety and depression.
• Basal ganglia and cerebellum both are responsible for movement, coordination and balance. THC disrupts functions of both. National Institute on drug abuse has reported that marijuana use can lead to decreased motor responses. It can cause impairs if motor coordination and reaction time. (For instance, impact on driving).
• Research findings report that people who start using marijuana at the age of 16 or younger demonstrate brain variation that indicates affected brain development in the prefrontal cortex which is responsible for complex thinking, judgement and reasoning. People who start using marijuana after the age of 16 experience accelerated brain ageing.
People are complex and life is messy sometimes so there’s no “one answer” for everyone. However social sciences aim at formulating a hypothesis and testing it on a sample group that represents the population. Thus the findings from the research studies mentioned above demonstrate the impact of cannabis on a sample that represents the population.

I did a poll on Instagram about same issue:

Results shows that people are still not aware about the addiction of this substance or they are not ready to accept it. Few questions which can help you to decided if you are addicted to marijuana/weed or not-

The problem with such mind altering substances is that we ignore the limits of adding these things in our body. Just like too much of caffeine or nicotine or any other herb can cause issues, same goes with marijuana. Few substances are rather helpful if you micro dose it. (just a hint – you can google and learn about it more).

Hit me up on my Email or DM me on Instagram for further discussion.

One thought on “Weed/Marijuana Addiction and Acceptance.”

This site uses Akismet to reduce spam. Learn how your comment data is processed.